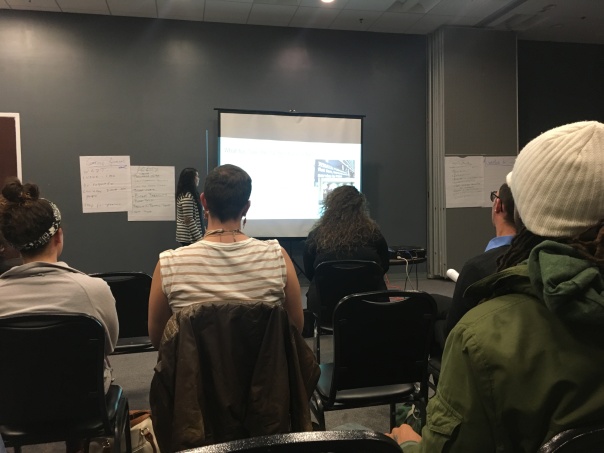 Metro Riders and organizers gather at the Festival Center for the People’s Metro Budget Forum on November 30th. (Photo by Matt Holt)

On March 27th, 1976, Metro began its service on a 4.2 mile stretch between Farragut North and Rhode Island Avenue. Nearly 51,000 passengers rode free that day. President Lyndon B. Johnson commissioned the construction of the Metro as part of his vision for a “Great Society,” directing planners during the early stages to scour the globe for design concepts so that the new system can “take its place among the most attractive in the world.”

Now the third-busiest subway system in the country, the 41-year old system is also among the youngest in the nation. Still, a host of problems plague the system. Maintenance issues, service disruptions, management and safety lapses along with extended rail closures means a decrease ridership. The three municipalities that Metro services — DC, Maryland and Virginia — have to negotiate with the federal government in order to obtain funding. Between the three municipalities, the only dedicated source of revenue that the Washington Metropolitan Area Transit Authority (WMATA) can bank on are the people that ride the system every day.

Metro’s Safetrack program was a major disruption to ridership. Intended to complete three years worth of maintenance and construction in a year’s time, all lines of the system at one point experienced either single-tracking or complete closures. The subsequent loss of ridership has only hamstrung Metro even further.

Ray LaHood, a former congressman and Secretary of Transportation, was hired by Virginia Gov. Terry McAuliffe (D-VA) to independently review the finances, management and operations of WMATA. The highly anticipated report was leaked and obtained by the Washington Post in November is the most thorough independent review of WMATA in years, and will set the benchmark for a vigorous debate of how Metro can become adequately funded.

The centerpiece of Lahood’s proposal is the five-page cover letter detailing his seven findings and six recommendations to improve Metro, including $500 million in new capital funding. The study also calls for Metro’s 16-person board to resign, and in its place, a 5-person board with the sole purpose of reforming WMATA.

“The agency’s board is too large, too fractious, and too oriented towards the interest of the region’s individual jurisdictions rather than the needs of the region as a whole,” LaHood’s report says. “This is not the fault of the people currently holding seats on the board; these issues pre-date them and will persist after they leave unless something is done.”

Another finding was that Metro offers more service per rider than other large transit agencies. The report urges that bus fares be increased from $2 to 2.10 — closer to the $2.16 average price of similar size travel agencies. The report also calls for a major overhaul of bus routes, which could save approximately $38 million a year.

LaHood says that current general manager Paul Wiedefeld is the best person to lead WMATA. “Since coming on board in late 2015, Mr. Wiedefeld has not shied away from taking on the problems that have plagued WMATA for years,” the report says. “He is the right person for the job at hand.”

Although LaHood stated a number in the report that he says will be adequate funding — $500 million — he did not mention a mechanism that would bring that money into WMATA. He mentioned that in 2008, Congressional approved nearly $1.5 billion over 10 years in special WMATA funding under the Passenger Rail Investment and Improvement Act (PRIIA) to be matched by local funding. The report cites that nearly 40% of rush hour ridership are federal employees and that this gives the federal government a “special responsibility to help WMATA succeed.”

In the report, LaHood says that he is not proposing a specific method to raise the funds because of the “many different arrangements that would work,” noting that the different jurisdictions that WMATA serves make things complex when it comes to funding.

“Each of WMATA’s funding partners will need to play a role, and each can generate its share in a way that makes sense for them,” the report says. “The methods can be different so as long as the key criteria are met: the total is sufficient, the funds are dedicated, and they arrive soon.”

Malcolm Kenton, a passenger rail specialist who studies transportation trends around the country, agrees that dedicated funding is the biggest issue plaguing WMATA.

“Metro is unique among U.S. transit systems in not having a dedicated regional source [of funding], and having to go hat in hand not knowing how much you’re going to have in your budget year after year,” Kenton said. “Going hat in hand to Congress, to the Maryland legislature, the Virginia legislature, and the DC Council for an appropriation. And they can’t count on the same thing every year.”

“The Metro is crumbling,” he continued. “Meanwhile, we have brand new, glamorously paved highway systems that are just way too congested. A properly funded and functional Metro is really important to this region.”

Kenton was one of the handful that attended “the People’s Metro Budget Forum” on November 30th. Metro riders got together in Columbia Heights to voice their concerns about the system they use every day.

People from all walks of life came together to discuss what Metro needs to improve on. Students, parents with their children, union members from ATU Local 689 — the union that represents many Metro workers, and organizers came together at the Festival Center in Columbia Heights. Organized by the Save Our System coalition under the umbrella of Americans for Transit, organizers led a discussion about Metro’s next budget, Ray LaHood’s proposal to improve Metro, and what can be done to make Metro rider’s voices heard.

David Thurston, an organizer the Save Our System coalition, started the meeting by talking about how expensive it is to get around the city.

“It costs me nearly 60 bucks a week to get around,” he says. “I could get around much more cheaply in New York City.”

He went to talk about Metro’s riders — most of whom he considered not to be rich.

Organizers ran a workshop where participants would take a look at Metro’s budget. Emmelia Talarico, a senior organizer of the Save our System coalition, facilitated a group conversation about Metro and informing riders what has been happening with WMATA.

Talarico started the discussion by reminding the crowd that Metrobus fares have climbed from $1.75 to $2, 33 bus routes are being eliminated or are having their service reduced, and that there’s no been late service for two years.

The lack of late service has hurt a lot of people, organizers who led the discussion say. Ale Ja Cinto, an organizer with the coalition, moved to DC and worked in the service industry, and the lack of Metrorail or Metrobus service at night made things very hard.

“When I got here, I was very broke and had to work late nights in restaurants,” they said. “And I couldn’t get home. I couldn’t even afford to get home. It was too expensive. I tried to crash on friends couches from time to time, and sometimes I found myself in situations I didn’t want to be in just because [the Metro] wasn’t open.”

Cinto got involved with the Save Our System coalition when he saw local organizers begin to push back on WMATA in a forceful way.

“My disgust and unhappiness about the system has gone back a long time,” they said. “

Talarico, who ran the forum, said that the lack of transparency was one of the biggest issues facing WMATA.

“A lot of people don’t know how to read the Metro budget, and I can’t blame them — some of these terms are really confusing,” she said to the group.

When asked about Lahood’s proposal to fix the Metro, Talarico did not seem to think that the proposal was a big deal, instead focusing her attention on the next Metro budget.

“When Ray LaHood held a town hall for his proposal, we came with a full set of proposals and he proceeded to ignore every single of one them,” she said.

At the event, Talarico was distributing a proposal to fund Metro called a “Transit Assessment District for WMATA,” a report by Peter Donohue of PBI Associates. It states that DC has nearly $1.7 billion dollars of tax revenue that is held up in tax-exempt, U.S. owned properties that could help solve WMATA’s funding woes.

“This proposal is the best I’ve seen so far,” she said. “We really need funding for our system. We can’t go on like this for much longer. We’ll continue to organize until we have a system that works for everybody, and that is affordable to everybody.”

“I believe public transit is a human right,” Cinto added. “People should be able to afford to get around in the city where they work and live.”

A WMATA spokesperson could not be reach for comment but pointed to an October 26th press release, where Metro GM Paul Wiedefeld proposed no fare increases or service cuts for riders. Wiedefeld proposed a combined operating and capital budget of just over $3.1 billion for FY2019 (beginning July 1, 2018) that requires an increase of $165 million over last year’s level of jurisdictional funding support.

“This proposal builds on our success in investing capital to deliver projects that improve safety and reliability, which is critical to winning back riders,” said Wiedefeld in the release. “This budget also doubles down on management cost controls to ensure we have squeezed the value out of every dollar that we spend delivering service to the region.”