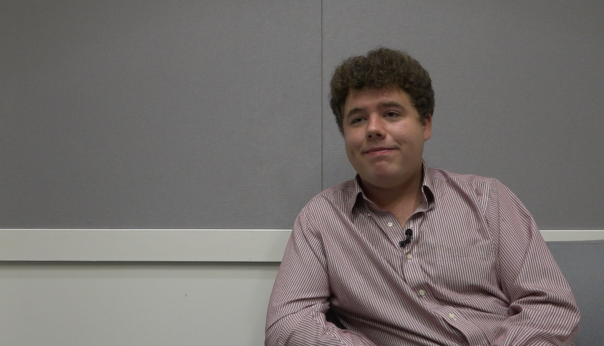 Growing up on the north side of Chicago, Robert Kennedy saw street violence on the news almost every night from an early age. His mother often covered the violence as a reporter and his friends were sometimes endangered by it. Not only was Kennedy concerned about the violence, but also how local gangs were drawing their funding from drugs and a “failed enforcement policy.”

“This is a societal issue that’s plaguing people in a way that goes far beyond any social liberty standpoint,” Kennedy said. “Let these people live their lives without having to worry about authorities breaking into their cars and their homes, with their first intention being ‘Do you have any drugs on you?’”

By the time he was in seventh grade, Kennedy was already reaching out to the Illinois chapter of the National Organization for the Reform of Marijuana Laws (NORML). He conducted research throughout high school, but by his senior year, Kennedy had become not only an advocate, but a patient as well.

After a particularly stressful senior year in high school, Kennedy’s Tourrete’s onset. He hadn’t experienced symptoms since he was 12. He said the only medication prescribed to combat Tourette’s is Haldol, a drug used to treat schizophrenia that only alleviates Tourette’s for certain patients. However, Kennedy soon discovered cannabidiol (CBD), an extract of cannabis. Kennedy said CBD alleviates the symptoms of his Tourette’s and allows him to function normally.

“It’s the closest thing that comes to a miracle drug for this,” Kennedy said.

When he came to D.C., Kennedy applied for a medical marijuana card. It took longer than he expected because he applied using his university address. He was the first student to try this. After weeks of waiting, Kennedy got his medical card and a local policy organization announced that the Department of Health and Human Services now allowed students to apply for a medical card using their universities as a private residence.

However, the use of marijuana still went against school policy. AU told Kennedy they would not make an exception for medical use, but in order to treat his Tourette’s he had to medicate in the dorm regardless. He often worried about being discovered and expelled from AU housing.

“I can’t look at this university the same way anymore without remembering the kind of fear that I had to live in,” Kennedy said.

Although he lives off campus today and is able to medicate legally, he worries about younger students who are experiencing similar conflict on campus. Kennedy said AU should be worrying less about losing federal funding and more about the wellbeing of its students.

One of the bigger problems facing the medical cannabis movement is public perception, Kennedy said. Though he sees the potential for cannabis to treat patients with epilepsy or cancer, Kennedy said the public’s idea of advocates being a bunch of dreadlocked hippies really hurts efforts for change.

“This social perception that continues to be fogged by media perception and political bias has continued to hold back our society, because it means that people like myself are not able to feel comfortable in places like their own university,” Kennedy said.

Kennedy said much of this perception is held by the older generation in positions of power. He said the biggest issue is that members of the HHS are uniformed on the issue and can’t appreciate that it’s a medical program.

“The fact that we have public office holders and public service servants still having that falsified information leftover from an era of fear tactics is impeding at the least,” Kennedy said.

Kennedy sees this especially in President Trump’s administration, which he said has been disrupting the movement. Attorney General Jeff Sessions has voiced his position against marijuana several times while in office. However, Kennedy said the fact that Sessions’ “outdated” views are given such a large platform should make people realize these are real issues.

“If anything, Jeff Sessions’ reaction to this is enticing the argument for cannabis and medical cannabis programs even more,” Kennedy said.

Kennedy hopes commercial marijuana in D.C. will be legal by next year. He said the best way to further the cannabis movement is to educate the public about its patient benefits and to reach out to local congressmen.

“I have hope for the future,” Kennedy said. “And I really do think the tides are changing.”